Thanksgiving was on hold for us Wednesday night as Nick was ill. Again. Feels like he has the flu all the time.

But then Thursday, he felt good enough that we went to the community dinner at 11am, then we went back home, he rested a while, then we took off to my son’s house for another turkey dinner at 6pm.

Yum. Nick ate really well, (which I think is part of the problem. He simply doesn’t eat enough)

All in all, it actually was a pretty good day.

Then last night he started running a fever. 100.6° which for most people isn’t much but for Cancer patients….this isn’t good. He just felt so lousy. Nick laid on the couch with a t shirt, sweater, down coat and his fleece mustang blanket on him and was STILL cold. He has no meat on his bones to help keep him warm.

About 2am, I woke up when I rolled over and put my arm across his chest. His t shirt was SOAKED with sweat. His temp this morning was 98.8°

He’s got a 1:20am appointment today. I hope he puts his foot down. Enough is enough. Why do we STILL not have an answer on the spots??? And he’s not called or stopped by so I don’t know what’s going on at the docs.

I’m so worn out from stress and worry, my eyes leak almost constantly now…..

Someone just let herself be pulled up in Uncle C’s lap and stayed there for over 10 minutes…..having a puppy in her arms helped I think…….*snortz* 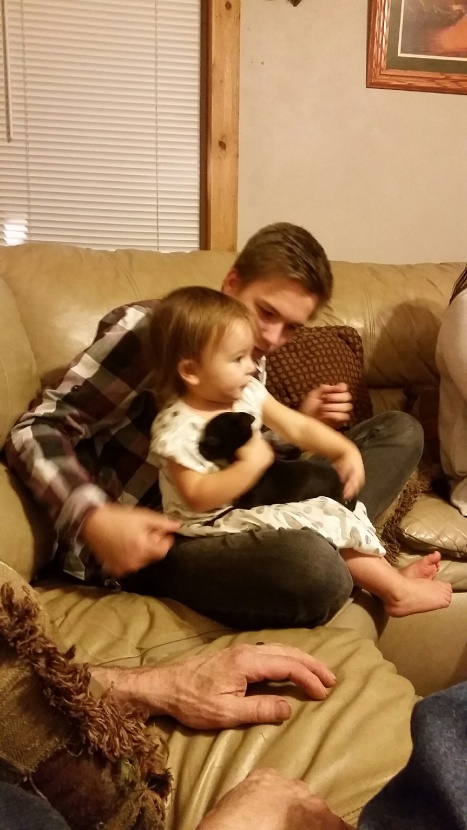